Cluttered tangles of Tau protein in the brain are a hallmark of Alzheimer’s disease as well as for a few other neurodegenerative diseases. A recent study in mice has shown that microglia, type of brain immune cell causes the tissue damage resulting from the Tau clumping.

As these tangles of Tau protein coalesce into a mass of Tau protein, tissue damage becomes apparent in various brain scans. This is when the patient starts to forget things and becomes confused.

How the Tau protein is related with Alzheimer’s 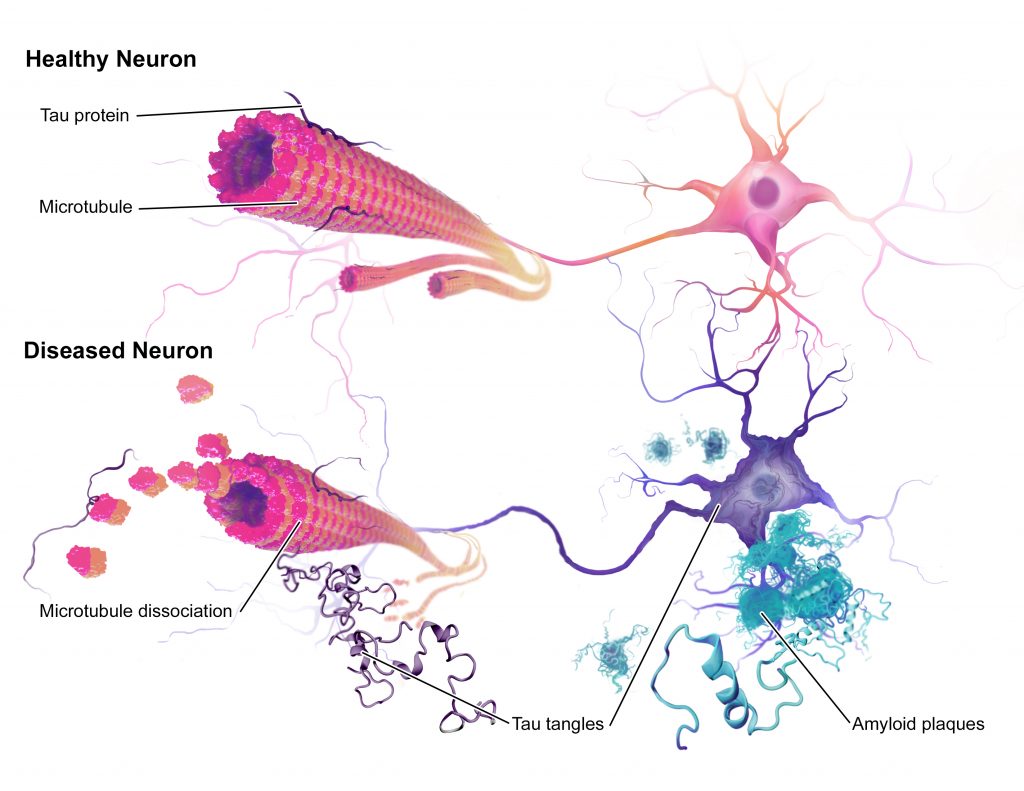 This recent research was published on October the 10th 2019, in the Journal of Experimental Medicine. The study shows that if these microglia cells can be eliminated, the risk of Tau-linked tissue damage in the mice can be drastically reduced. It also goes to suggest that the onset of dementia in humans can be prevented or delayed if such cells can be suppressed.

According to the author of the paper, David M. Holtzman, MD, Washington University School of Medicine, the current state of Alzheimer’s treatment is just not that effective. However, if a drug that can target these brain-immune cells and suppress them at the very initial stage of neuro-degeneration can be produced, then it will be absolutely noble to evaluate in humans.

Alzheimer’s is a condition of dementia, i.e., the brain tissues are destroyed. Even though scientists are not entirely sure what causes this condition to arise, they have, however, narrowed it down to two primary agents: Tau & Beta-amyloid proteins. Dr. Holtzman and his team were more concerned with the former in their study.

Under normal conditions, the Tau protein contributes to the healthy functioning of brain tissues. However, in some people, mostly among football players and boxers and those who have suffered repeated blows to their head, the Tau can coalesce into toxic tangles that lead to Alzheimer’s and other neurodegenerative diseases. Through the course of this study, Holtzman and his colleagues found that microglial cells limit the development of these harmful forms of the tau protein in the initial stages. However, as the clustering continues into later phases, these cells attempt to attack the tangles and harm the nearby neurons, thus leading to neurodegeneration.

To understand how the microglia cells contribute to Tau-driven neuro-degeneration researchers, studied genetically modified mice with a mutant form of human Tau protein. They found out that the development of Tau-tangles starts at around six months of age, and the damage happens by nine months of age.

The gene responsible for Alzheimer’s 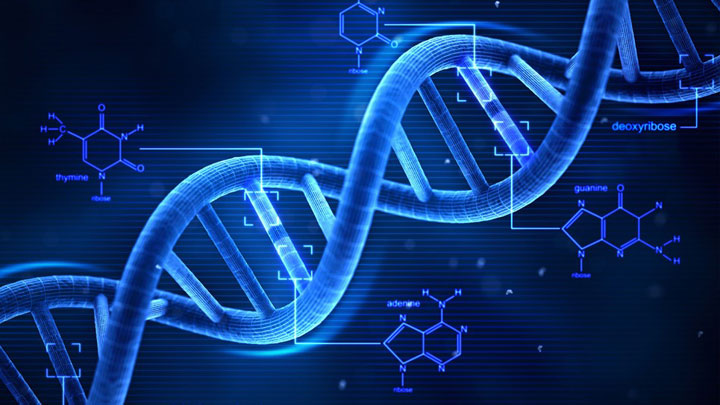 At this point, the researchers turned to the gene APOE. This gene is present in every human being. Those who carry the APOE4 variant have more risk of developing Alzheimer’s condition about 12 times more than people carrying the lower-risk variants. Having already concluded that the APOE4 variant contributes to amplifying the toxic effects of Tau, the researchers genetically modified mice so that one group carries the human APOE4 variant while the other group has no APOE gene.

When these mice were six months of age, the researchers fed one group with a compound that can reduce the concentration of microglial cells in the brain, while the others were given a placebo. This was continued for a period of three months.

They found that the mice with the APOE4 variant shrunk severely and were damaged by nine and a half months of age. This, however, happened in the mice where microglia was also present. In those mice where the compound eliminated the microglia, the brains seemed to be functioning normally and healthily. Evidence of harmful Tau was much less even though APOE4 was present. 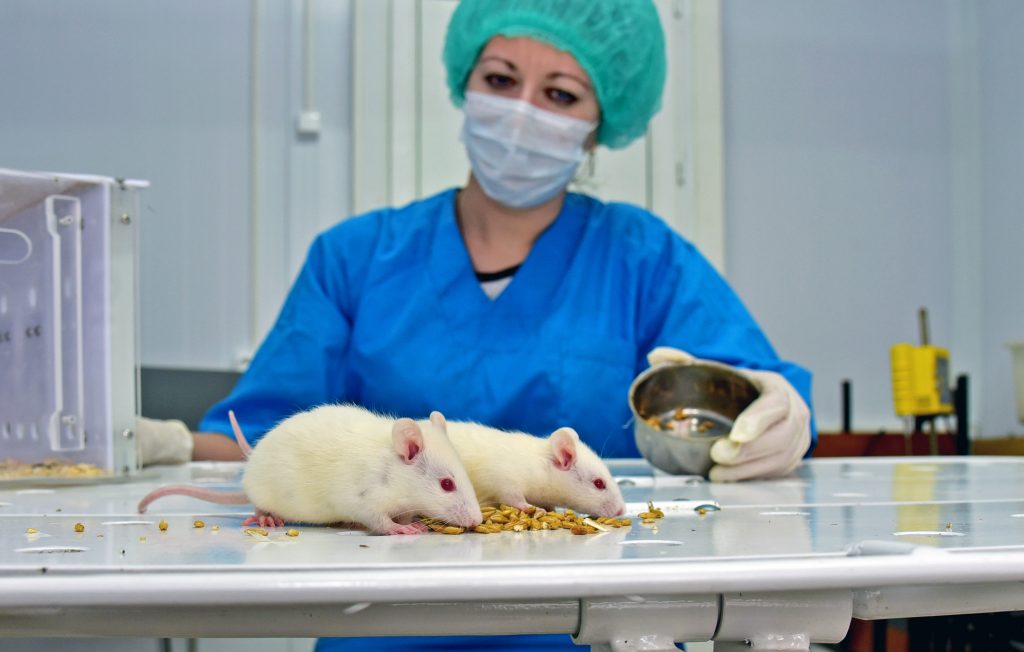 According to Yang Shi, first author and a Ph.D. researcher in Dr. Holtzman’s team, it is microglia that drives neuro-degeneration, and it probably happens through inflammation- provoked neural damage. However, even if you have microglia, as long as it is not activated, you will have no neurological damage.

This research largely indicates that microglia is the “Lex Luther” of the neurodegenerative process of the brain. The compound used in this study by the good doctor and his team is somewhat a poor option for developing drugs, but even though it can point out the way to other compounds that can be customized to microglia.

Previous studies related to this topic also showed that microglia is the linchpin in the development of toxic Tau-tangles that lead to Alzheimer’s and other neurodegenerative diseases. As such, this study remains of vital importance as it has given the first head-way to Alzheimer’s treatment by suppressing microglial cells in the brain.

AdiWilliams -
Over time, there have been several debates on which is healthier and safer, alcohol-based drinks, or nonalcoholic drinks. The discussion has always brought a...

AdiWilliams -
Did you know that breakfast contributes more to weight trimming compared to lunch and evening meals? Okay, if no, then I thought you should...

AdiWilliams -
About 1 trillion microbes nicely live in the gastrointestinal tract. Probiotics are live bacteria that we can consume and improve the 1 trillion microbes’...
We want to use cookies to ensure that we give you the best experience on our website. Click "OK" if you are ok with it.OkNoPrivacy policy
You can revoke your consent any time using the Revoke consent button.Revoke cookies